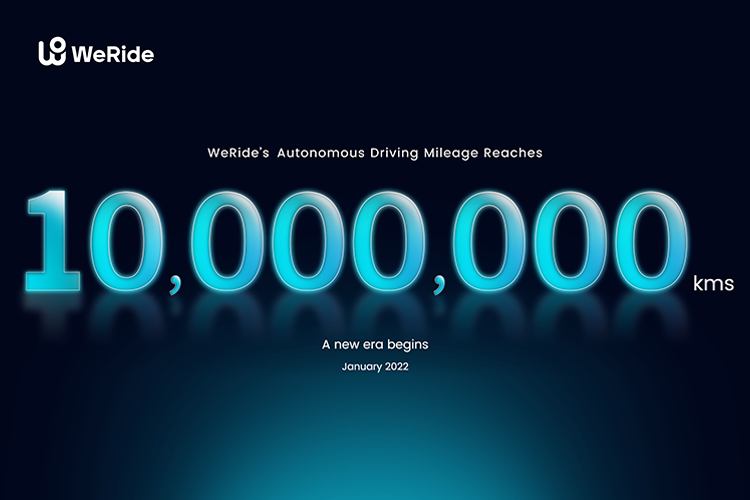 WeRide has accumulated a massive number of high-quality scenarios through 10 million kilometers, combining testing and operations with more than 300 AD vehicles over the past four years. WeRide’s fleets comprise Robotaxi, Robobus, and Robovan, running in cities such as Guangzhou, Zhengzhou, Nanjing, Wuhan, Anqing in China and San Jose in the US. They are tested and operated day and night, traveling from CBDs to urban villages, tunnels to highways, under the sun, rain and snow, all contributing to generate an abundance of valuable AD data.

The accumulated valuable AD data are collected and fed into WeRide’s self-developed simulation platform. Through recreating multiple variations of real driving scenarios on the platform, WeRide has attained over 8 billion kilometers in simulations, a number equivalent to the mileage of 300 AD vehicles driving on the public road for 50 years.

The achievement of the 10 million kilometers of autonomous driving on public road and the 8 billion kilometers in simulations means that WeRide is fully capable in raising efficiency on the test and enabling its AD system to operate under complex traffic conditions in a more stable and reliable way.  WeRide will continue to develop through optimizing the data models and algorithms.

Real-world road tests pose great challenges on the perception ability and stability of the AD hardware. WeRide’s sensor suite is now completed with an even more integrated, efficient, and stable hardware solutions throughout the 5 times upgrade based on the massive tests results and data received. Released in November 2021, the latest WeRide Sensor Suite 4.0 is the first small and lightweight suite for the L4 AD. A major step towards mass production of autonomous vehicles, the Suite 4.0 can be widely used in different passenger vehicles.

Since November 2019, WeRide has launched Robotaxi service to the public in China. The mileage accumulated through the operations since then plays an important role in WeRide’s 10 million kilometers achievement. In addition to the safety and stability in autonomous driving, ride experience and transport efficiency are especially important, serving as the indicator to examine WeRide’s AD system for operation. The abundant AD data from the 10 million kilometers has given the engineering team a great deal of samples to examine and improve the performance of Robotaxi, paving the way for large-scale operation and commercialization in the future.

The achievement of 10 million kilometers autonomous driving mileage is a new climax, yet another starting point for WeRide. With the upcoming commercialization of fully driverless operation, WeRide will keep going and ensure that every kilometer ahead will be safe and sound as always.

WeRide has received strategic investments from top-tier global automakers including Renault-Nissan-Mitsubishi Alliance, Yutong Group and GAC Group. It is the first startup in the world to hold driverless test permits in both China and the US.

Established in 2017, WeRide is headquartered in Guangzhou, China, and maintains R&D and operation centers in Beijing, Shanghai, Shenzhen, Nanjing, Wuhan, Zhengzhou and Anqing, as well as San Jose in the US. It employs a highly skilled team of over 800 employees around the globe and has extensive domestic and international experience in R&D, business development and operations.

(11/20/2019) To many industry participants, software-as-a-service (SaaS) – specifically the migration of on- premises software to cloud-based solutions – is the biggest opportunity on the dark side. China’s enterprise-level SaaS market was worth RMB24.3 billion in 2018, a 48% year-on-year increase on 2017. IResearch Consulting projects it will reach RMB65.4 billion by 2021.